However, most farriers are working 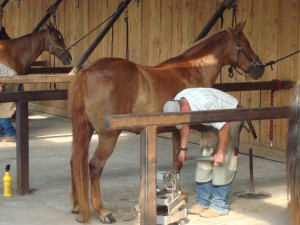 The first post for The HoofWall suggested giving consideration to something other than work. However, we all know it’s not that easy. There are hundreds of farriers each year that are not only pushing through their rigorous daily schedule, but have challenged themselves to improve their horseshoeing and forging skills to work toward certification at one level or another.

This summer was no exception, despite the heat. Recently there was an AFA certification held at the Kentucky Horseshoeing School outside Richmond, KY. It was plenty hot- but the examiner (John Voight) and testers (Buck McClendon, Steve Prescott, Brandon Coates), along with a tough group of farriers taking the CF and CJF level of certification exams, were hard at it. This is one of the most enduring programs of the American Farrier’s Association and the dedication of the examiners and testers has kept it moving forward, regardless of changes in the direction of the Association over the years. The farrier certification tests are held throughout the year in various locations, depending heavily on the volunteers to organize, test, hold horses and generally work together to reach a common goal of elevating the profession and the level of hoof care. It may not be obvious to the casual observer, but the various levels of certification attained by these farriers came at a cost- literally and figuratively- for themselves and the folks who volunteered to help get it all organized.

This entry was posted in The Hoof and tagged certification, Farrier, hoof, horseshoeing. Bookmark the permalink.