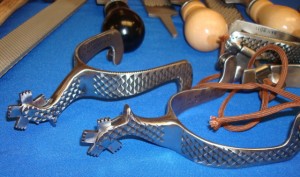 These spurs were made by farrier Dan Wisely from Powderly, Texas.

Throughout the farrier industry there are individuals with a lot of talent. Some of the most interesting work is seen not on the hoof but in special forged pieces, a hobby and passion among many farriers. Recently FPD had a pair of spurs produced by farrier Dan Wisely from Powderly, TX. These spurs were donated to an auction being held at Anvil Brand Shoe Company to help raise funds for a farrier undergoing cancer treatments.

Wisely used rasps as the main component of the spurs. The spurs he has produced are not just for conversation but in fact are used by riders that have requested specific design features. It’s easy to see how they can become a topic of conversation with the detail and special look that rasps can give to a piece. 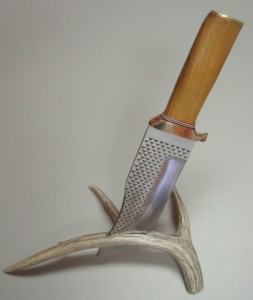 A second piece that we have on hand in the offices of FPD is a knife made by Jerry Pennington of Hot Springs, Arkansas. The knife was hand-made, from the blade (using a Bellota Raptor rasp) to the handle (hedgeapple wood) and all the other components. The image may not reflect the actual size of the knife. The overall length is 13″. Blade is 2-1/4″ wide by 7-3/4″.

Jerry has been making knives for many years and this knife was made working with Claude Lambert. One of the markings on the knife is “JHU”, made using his Journeyman Horseshoers Union stamp. Originally these stamps were used for shoes made by members of the JHU to help identify their work. The JHU is still in existence but membership is scattered and loosely organized, with most remaining members involved in race track work.

This entry was posted in People and tagged blacksmith, Farrier, rasps. Bookmark the permalink.