The management of mismatched hoof angles remains a controversial subject for both the farrier and veterinarian. Mismatched feet could be defined as forefeet conformation which have a high or upright hoof angle on one foot and a low hoof capsule angle on the contra lateral foot (Figures 1a and 1b).The difference between the forefeet could range from a high hoof angle with a straight hoof pastern axis to a club foot with a flexural deformity and an overloaded low heel on the contra lateral limb. The mass, integrity and difference in heel height will be the contributing factor to the mismatched dorsal hoof angles (Figure 2). Limb length disparity has been suggested as a cause for mismatched feet although it has not been scientifically proven. Mismatched feet may contribute to poor performance, subtle lameness and a shortened anterior phase of the stride. Traditional farriery seeks to elevate the heel on the low foot and therefore match the forefeet. However, this practice should be discouraged and treatment should be based on farriery principles to improve the structures and function of the individual foot. 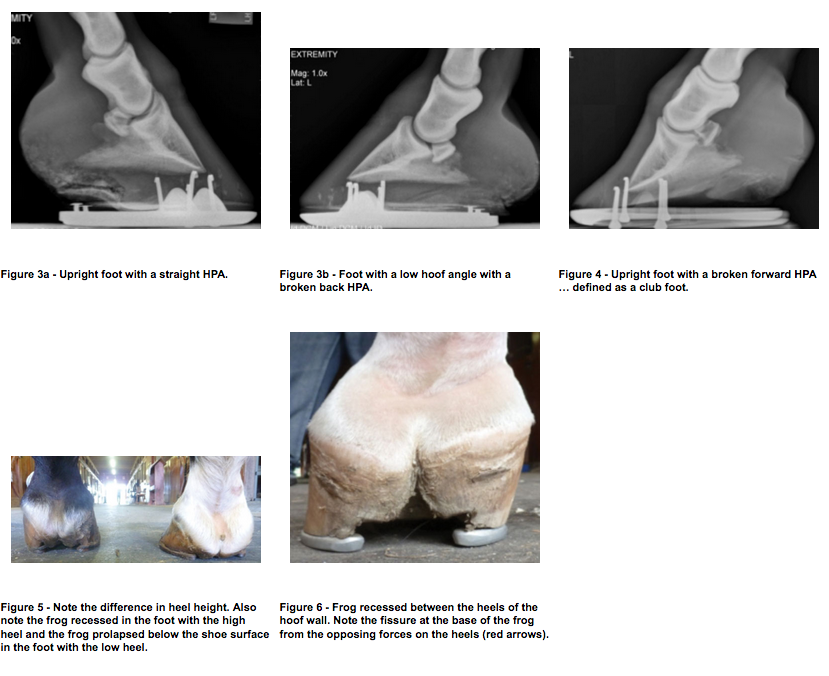 The horse should be evaluated in motion at both the walk and the trot. First and foremost it is important to rule out any lameness. It is especially important to evaluate the landing pattern of the forefeet as the foot with the high hoof angle will often land toe first rather than flat. Lastly, the horse should be trotted to note whether the horse has a shortened stride of the high heeled foot. It must be remembered that a shortened stride on one limb will cause the opposite foot to be on the ground longer. Overtime, this can create further damage to the heel structures of the foot with the low heel resulting in a flat “panned out” low angle foot (Figure 7).

Horses with a disparity between dorsal hoof wall angles will generally have a straight HPA and the hoof wall growth below the coronet from the toe to the heel will be even (Figure 8a and 8b).

In this case, the author suggests using good farriery principles to apply the appropriate trim and shoe each foot on an individual basis. 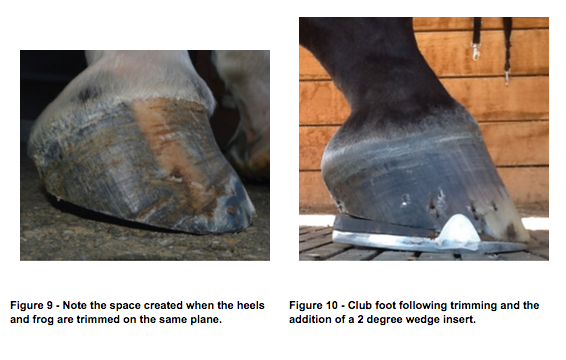 Managing horses with mismatched feet where one foot has a markedly high hoof angle or a club foot becomes more complex. This type of case will often present with a shortened stride on the limb with the upright foot and or a discernible lameness. Low or compromised heel structures may be noted on the opposite foot from overloading the heel on that side due to the shortened stride placing excess weight on that foot overtime. Managing these horses can be difficult and the proper shoeing protocol may not be inherently obvious. Again it must be emphasized that each foot should be approached on an individual basis. It is common to see horses with mismatched feet shod with two different size shoes; often a smaller shoe is used on the upright foot. This practice should be avoided as the ground surface on both forefeet should be the same. One of the objectives of trimming the club foot is to redistribute the load to the palmar section of the foot and restore functionality. Briefly, farriery for the club foot begins by drawing a line across the widest part of the foot, trimming any loose horn off the frog and then trimming from that line palmarly until the heels of the hoof capsule and the frog are on the same plane. The trim can be quite dramatic as the frog is often quite recessed well below the heels of the hoof capsule. The toe length is reduced and any concavity is removed with a rasp from the outer surface of the dorsal hoof wall. If a significant amount of heel is removed, the trimmed foot should be placed on the ground 6-8 inches palmar to the contralateral limb (Figure 9). If a space is present between the heels of the foot and the ground, some form of heel elevation will be necessary Furthermore, if a toe first foot landing is noted during the initial evaluation, heel elevation will again be necessary in order to load the heels (Figure 10). Breakover is placed well under the foot to decrease the load on the toe and further decrease the tension in the deep digital flexor tendon.

When approaching the foot with the low angle, the clinician is often inclined to wedge up the heels to improve the hoof-pastern axis. However, this will place more stress on the already compromised heel structures. Although the hoof pastern axis will appear improved immediately following this type of shoeing, the long term effect is exacerbation of the low angle, further crushing of the heels and prolapse of the frog below the ground surface of the foot. Alternatively, the heels should be trimmed back to the widest point of the frog if possible or an attempt should be made to get the hoof wall at the heels and the frog on the same plane. As much toe length as possible should be reduced, generally using the dorsal hoof wall as there is usually decreased sole thickness in the foot with a low heel. It should be emphasized that when possible it is extremely important to obtain good quality radiographs prior to trimming to determine the amount of heel and especially sole that can be removed. Breakover such as a rolled toe or a rocker toe if there is adequate sole thickness to allow it to be trimmed into the foot, is very beneficial as it will further decrease the leverage at the toe on the low angle hoof. The center of pressure (COP) on a low angle foot is further palmar than that of the upright or normal hoof, therefore, the shoeing protocol is directed at moving the COP away from the overloaded heels. Additionally redistributing the load or load sharing with the weight bearing structures of the low angle foot may help to decrease the forces directed to the heels. This can be accomplished with impression material, a pour-in pad and a spider plate or a heel plate added to the palmar aspect of the shoe (Figures 11a, 11b, 11c). 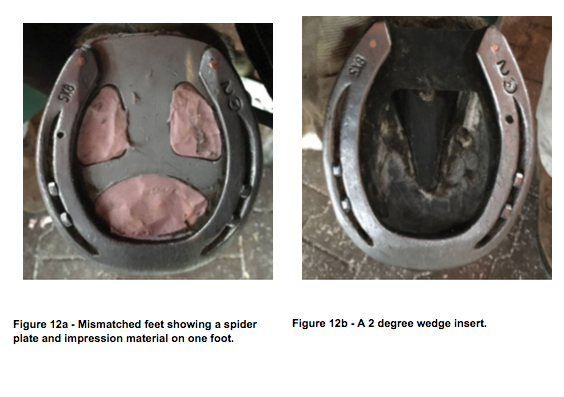 A thorough understanding of good trimming techniques, shoe placement and shoeing the hoof to bear weight as evenly as possible over the entire foot is necessary to manage horses with mismatched feet. Often these horses will move better, have an even stride and may remain sound longer. As with all good farriery, the therapeutic measures must begin with the appropriate trim and each foot should be managed on an individual basis (Figure 12). An understanding of the normal form and function of the anatomic elements of the horse’s digit, and how these elements may respond to therapeutic changes, is essential to achieving the best possible outcome. Finally, therapeutic farriery for mismatched feet is rarely a one-time effort. Owners and trainers must understand that reevaluation and appropriate correction(s) on a regular schedule are necessary to maintain results

The Art and Science of Farriery

Since their founding in 1990, Farrier Product Distribution has remained committed to sharing useful and practical shoeing information and methods with farriers across the country.
Sponsoring clinics is just one way in which the company works to improve farrier knowledge and techniques. In addition, FPD is well known in the industry for their pursuit and development of the best products to meet the needs of the farrier - and the horse. With the best quality products – and the knowledge needed to use them – your job becomes easier and your skill always gets better.