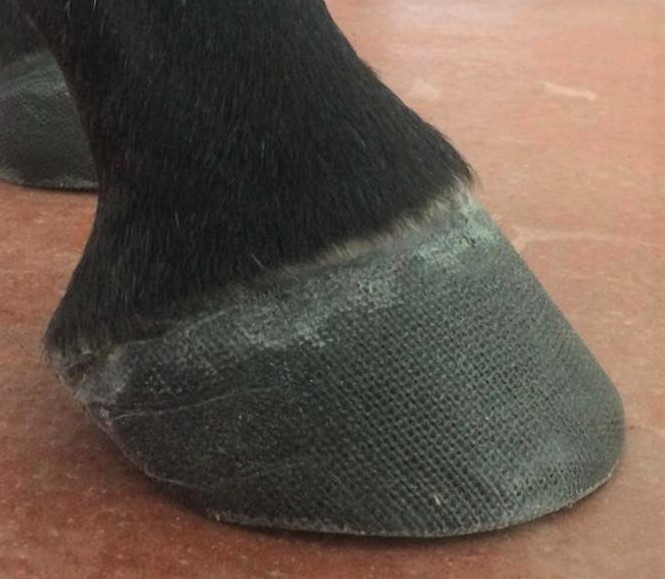 INTRODUCTION
The equine foot, with healthy structures, is superior in its natural or barefoot state as opposed to the shod state with regards to accepting the weight of the horse, shock absorption and dissipating the energy of impact (Davies 2007).

However, the domestic use of the horse invariably necessitates applying shoes for several reasons:
•    Protection when wear on the ground surface of the foot exceeds growth at the coronet.
•    Maintaining or enhancing functionality such as providing safety and traction
•    Therapeutic aid to improve the structures of the foot and treat disease/lameness.

There are many aspects of barefoot methodology that can be applied to, or combined with traditional farriery, and warrant consideration. The first author has been consistently successful in improving the structures of the hoof capsule, especially the palmar section of the foot, in a huge number of horses by leaving the horse barefoot for a short period of time. The use of hoof casts is not new to veterinary medicine as they are used for fractures, laminitis, avulsions, and countless other problems affecting the equine foot. Recently, casts have gained popularity in farriery to maintain horses in the barefoot state, hoof wall defects, white line disease and compromised feet where shoes are not an option.

Hoof casts
Hoof casts have always been used in veterinary practice to treat foot problems when indicated, but I was never an advocate for using them in farriery. My main concern was the restrictive nature of the cast that impeded the physiological function of the foot and the inconsistent methods of application. Recently, Derek Poupard, CJF, DipWCF pioneered a revolutionary new technique for cast application and launched a company known as Hoofcast LLC. The technique is geared toward providing strength, protection and stability to the hoof capsule yet does not interfere with, or compromise, foot function. There are many reasons why this cast application can and should become a viable aspect of good basic farriery. The use of a foot cast presents a viable option to farriers that can be used on its own merits when necessary, or combined with traditional farriery.

Scenarios where a cast is beneficial:
•    Rehabilitating the foot in the barefoot state
•    Transitioning the horse from being shod to barefoot
•    Permits light exercise when horse is being maintained in the barefoot state
•    Stabilizing / increasing thickness of a thin or compromised hoof wall
•    Aids in attaching a shoe using nails
•    Stabilizing hoof wall defects (toe, quarter and heel cracks)
•    White line disease
•    Can be used as an alternative to glue-on shoes

Application of the cast

The cast application described here will be different than the one currently being used. Trimming the foot prior to cast application is always a crucial step and will depend on whether the foot is being rehabilitated for a hoof capsule distortion, being transitioned to barefoot or going to be shod. Briefly, if the horse is going to be left barefoot, the foot to be casted is brushed briskly with a wire brush, no horn is removed from the solar surface of the foot, the heels of the hoof capsule are trimmed to the plane of the frog if possible and the edges of bearing border of the hoof capsule is rounded using the rasp at an angle. If the horse is being shod, the guidelines for trimming will adhere to the principles of good basic farriery. Briefly, the authors draw a line across the widest part of the foot and trim the foot appropriately, attempting to achieve approximate proportions on either side of the line with the heels of the hoof capsule and the frog on the same plane (Figure1A).

To apply the cast, the outer surface of hoof wall at the heels is cleaned with a rasp and the remainder of the outer surface is sanded using a 3M® medium grit sanding block (Figure 1B and 1C). A thick focal layer of an acrylic adhesive compound of your choice is applied to the outer surface of the hoof wall at the heels, as this will act as the anchor point to stabilize the cast. A thin layer of acrylic is randomly spread on the remainder of the outer hoof wall, stopping below the coronet. Starting at the heels, 2- or 3-inch casting tape is wrapped around the perimeter of the foot (Figure 2A, 2B and 2C). The cast is applied, without being immersed in water first, as this allows the acrylic to permeate between the fibers of the cast which forms a bond with the outer hoof wall. The cast will extend to just below the coronet and at least 0.5 inches below the hoof wall to create a fold onto the ground surface of the foot. The cast can be thickened at the heels and/or the quarters, by creating some folds by layering the cast back and forth and then enveloping the folds as one continues to wrap around the perimeter of the foot. With the cast in place, a sponge soaked in water is used to thoroughly wet the cast, which causes it to cure. This step is unique to this application, as the acrylic incorporated in the cast that adheres to the outer hoof wall is now beginning to cure and the water added to the cast now causes the cast to cure. Interestingly, neither the reaction of the acrylic or the cast interfere with the other.  Finally, the cast is covered with plastic wrap and the foot is placed on the ground to flatten the cast on the solar surface of the foot. (Figure 3A, 3B, 3C and 3D).

The most unique part of this application is removing the section of cast that bridges the bulbs of the heels. Once the cast has cured, using the edge of the rasp, the cast is scored on either side of the frog from the frog sulci to the edge of the cast at the hairline of heel bulb. The score lines are now cut through using a thin hoof knife or some form of saw blade or gigli wire. The first author uses a hacksaw blade handle (available from Amazon®) which can be used with one hand and cuts easily through the cured cast.  The section of cast that covers the base of the frog is removed and the edges of the cast are smoothed with a rasp and blended with the heel bulb (Figure 4A & 4B & 5C).

Finally, any cast material above, or at the coronet, is removed by light rasping as the acrylic does not extend to coronet, so cast is not adhered to this area (Figure 5). Following the curing process, a shoe can now be applied to the casted foot (Figure 6).

Let’s be clear, the authors are not advocating hoof casts as an alternative to farriery – rather an option to combine with or enhance good basic farriery. It can readily be noted, the application of a hoof cast, as described above, adheres to the outer surface of the hoof, affords protection, and provides strength and stability to the hoof capsule while allowing the full physiological function of the foot. The increase bulk added to the hoof wall allows a shoe to be attached in cases where nailing was difficult. Furthermore, the cast forms an interface at the heels that adds protection and decreases wear that arises from the heel moving against the shoe during weight bearing. This method of cast application has huge implications when considering any aspect of farriery, whether the horse is shod or barefoot. The reluctance of many veterinarians, farriers and horse owners to remove the shoes to rehabilitate the hoof capsule or transition to being barefoot is the initial discomfort the horse may experience and the damage to the hoof capsule without the protection of a shoe. Here is a hoof cast application that will bridge that gap, while allowing the structures of the hoof to adapt, strengthen, change foot conformation, and restore. The potential uses for this hoof cast application are unlimited and only now being imagined.

Dr. Steve O’Grady operates Virginia Therapeutic Farriery which is a referral practice devoted to therapeutic farriery located in Keswick, Virginia. Website: https://www.equipodiatry.com  Disclaimer: Dr. O’Grady has no financial interest in Farrier Product Distribution (FPD) or Hoofcast LLC but routinely uses and recommends their products in his veterinary practice.  Derek Poupard is the head farrier for Godolphin with locations in Dubai and Newmarket, England. Disclaimer: Derek Poupard has a financial interest in Hoofcast LLC.

The Art and Science of Farriery

Since their founding in 1990, Farrier Product Distribution has remained committed to sharing useful and practical shoeing information and methods with farriers across the country.
Sponsoring clinics is just one way in which the company works to improve farrier knowledge and techniques. In addition, FPD is well known in the industry for their pursuit and development of the best products to meet the needs of the farrier - and the horse. With the best quality products – and the knowledge needed to use them – your job becomes easier and your skill always gets better.