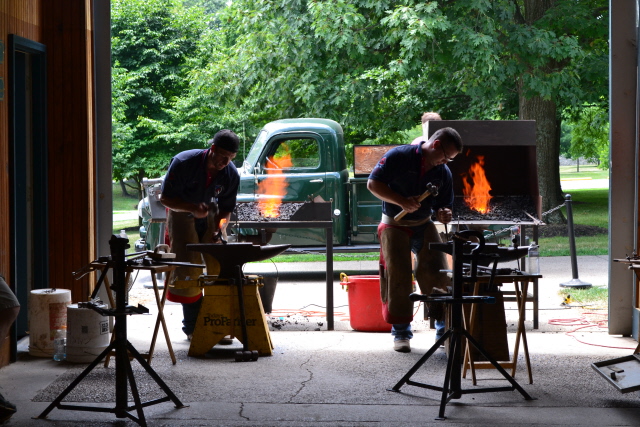 AFT members Daniel Jones, CJF (left) and Bryan Osborne, CJF, forging shoes for the Lexington mounted police horses during a team practice held at the Ky Horse Park. Note the '52 Dodge pickup in the background, on loan to the Horse Park from FPD.

Friday June 22: Rob Logsdon and I (FPD Sales Staff members) attended the American Farriers Team Practice.  We were met by the Team Manager, Conrad Trow, CJF.  Conrad is a well-respected farrier holding a diploma with The Worshipful Company of Farriers.  Prior to becoming the Team Manager of AFA’s national horseshoeing team, Conrad was a competing team member.  He participated in competitions nationally and internationally, earning top honors along the way.

The team is comprised of farriers from all over the United States. Chris Overly, CJF from Kentucky, is the Team Captain. He works alongside Daniel Jones, CJF (Alabama), Bryan Osborne, CJF (Kentucky),  and Justin Fry, CJF (Minnesota), with Cody Gregory, CJF (Missouri) as the first alternate and Scott Inmon, CJF (Texas) as the second alternate. 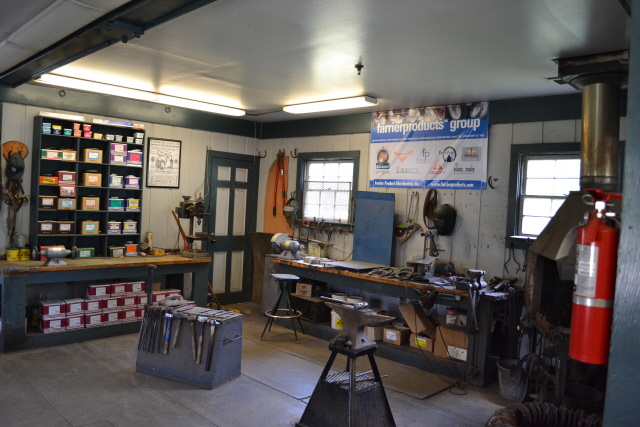 The Kentucky Horse Park has a farrier shop where farrier John Veague shoes many of the Park horses. FPD has funded much of the product and equipment used in the shop, including a recent expansion of the public display area.

The practice was held at the KY Horse Park, in the Mounted Police Barn.  The KY Horse Park’s Farrier Shop, which is sponsored by FPD, lent the team a forge and anvils for the practice.  The KY Mounted Police provided horses to be shod during the practice on Friday and Saturday.  The practice consists of two intense days, full of forging and live horseshoeing.  At the practice we watched, the team was given two horses to shoe all the way around, in a limited amount of time.  Liberty nails were used- typical nail choice for many competitors. When their time had expired, Conrad inspected their work and offered suggestions.  It was amazing to see so many farriers in such a confined space, working as one functioning unit.  The hard work and dedication that these guys put into their trade is really evident in the finished product, which you can see below. 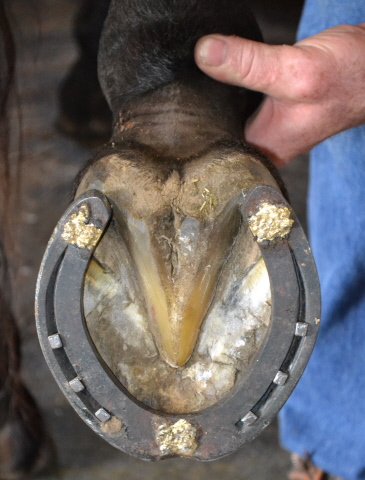 AFT shoeing job- forged during team practice and nailed with Liberty E-7 Slim horseshoe nails. Hard surfacing applied for traction when the Mounted Police force is on the streets.

The next AFT practice will be held on Friday, July 27th and Saturday, July 28th at the KY Horse Park in the KY Mounted Police Barn.

This entry was posted in Events, On the Road, People, The Hoof and tagged american farrier, horse park, liberty nails. Bookmark the permalink.