The first report on the Roger Bockstaele clinic in Wisconsin showed the participants forming the frame and body of the bird.

This was moving along fairly well so Roger started someone on the task of building the feet. They started with round stock that was then narrowed and drawn to form the claws. Texturing was done with a couple different punches that Roger brought with him. Once the texturing was completed on the toes, they were welded to a leg and set aside to be mounted to the body. 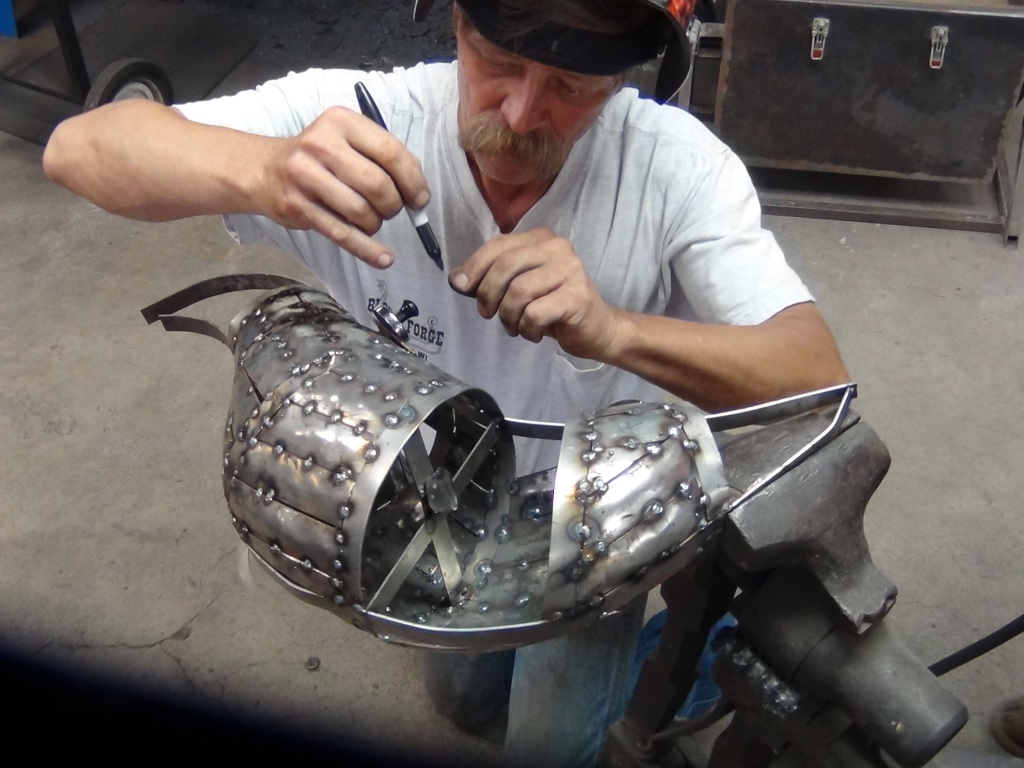 Body Building – Roy Bloom continued working through the formation of the body, meticulously cutting and welding the strips to provide the surface for the feathers. 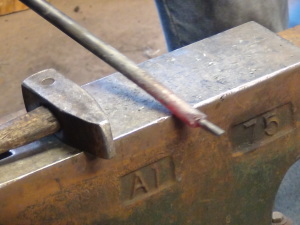 Forging the round stock to create the claw and segments of the feet. 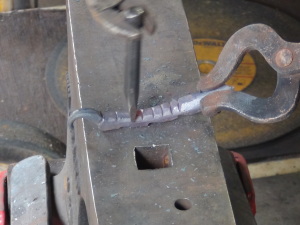 Detailing the feet before welding the sections together. 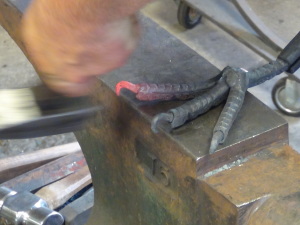 The three segments are welded to the leg and the claws are fine tuned. 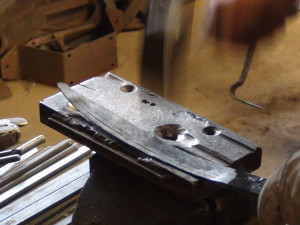 Roger has built another top tool that is used to put the finishing touches on the feathers after veining, in this case a “crease” to give some definition to the feather.

While the foot work was taking shape, the numerous feathers that would be needed were started through the process. Roger started with the main wing feathers and started piecing them together, using a template he had shipped along with the light gauge flat stock of various widths used for the framing and feathers. 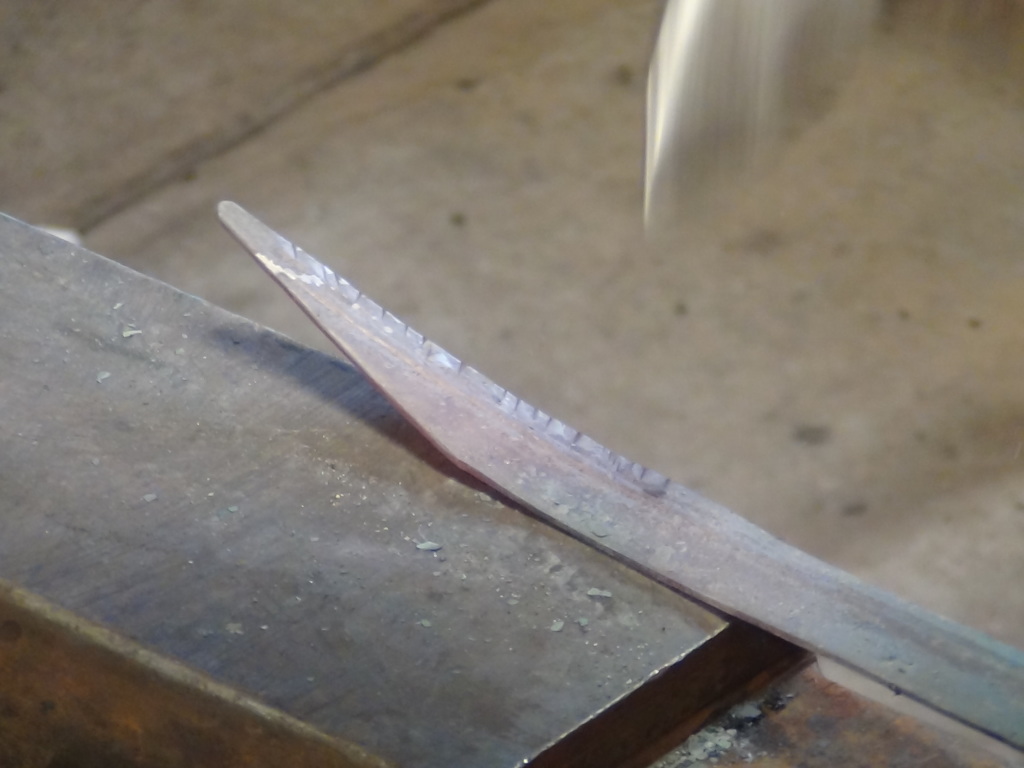 After veining each feather, the “texturing” was done with a cross pein.

Veining, texturing, and cutting to length were the key steps, with everyone pitching in. A bird of the size in this project takes several hundred to a thousand feathers. Roy Bloom could see the feather portion of this would take hours, especially with just one veining tool that Roger brought with him from Belgium.

Roy decided to build a spring tool for his Big Blue air hammer and put that to work to help with the feather production. Tom Willoughby also built a new anvil top tool for veining that was similar to the design that Roger has developed. 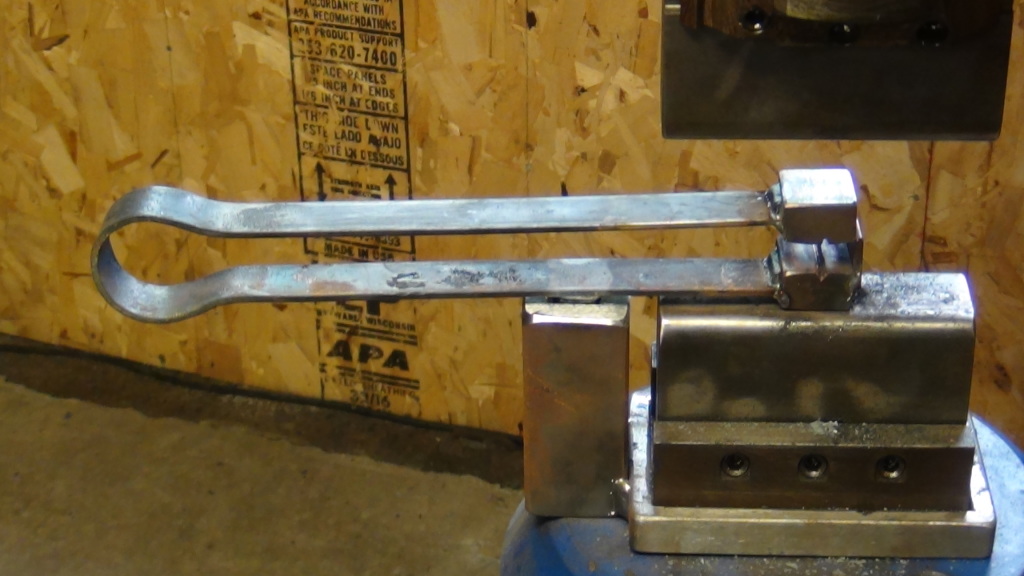 Roy’s spring tool for veining the feathers. “When in need – just build it,” is Roy Bloom’s shop motto. This tool allowed a lot of feather production to happen in a shorter time frame. 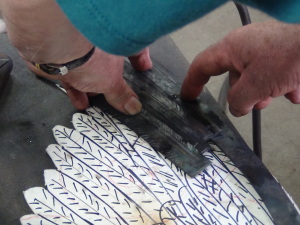 Roger brought the template for the wing feathers and the “feathering” of the bird began in earnest. 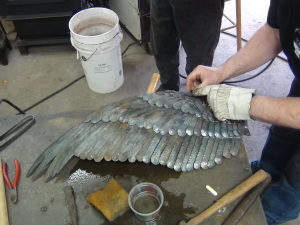 Feathers on top of wing are almost in place. Next step was to add feathers underneath. 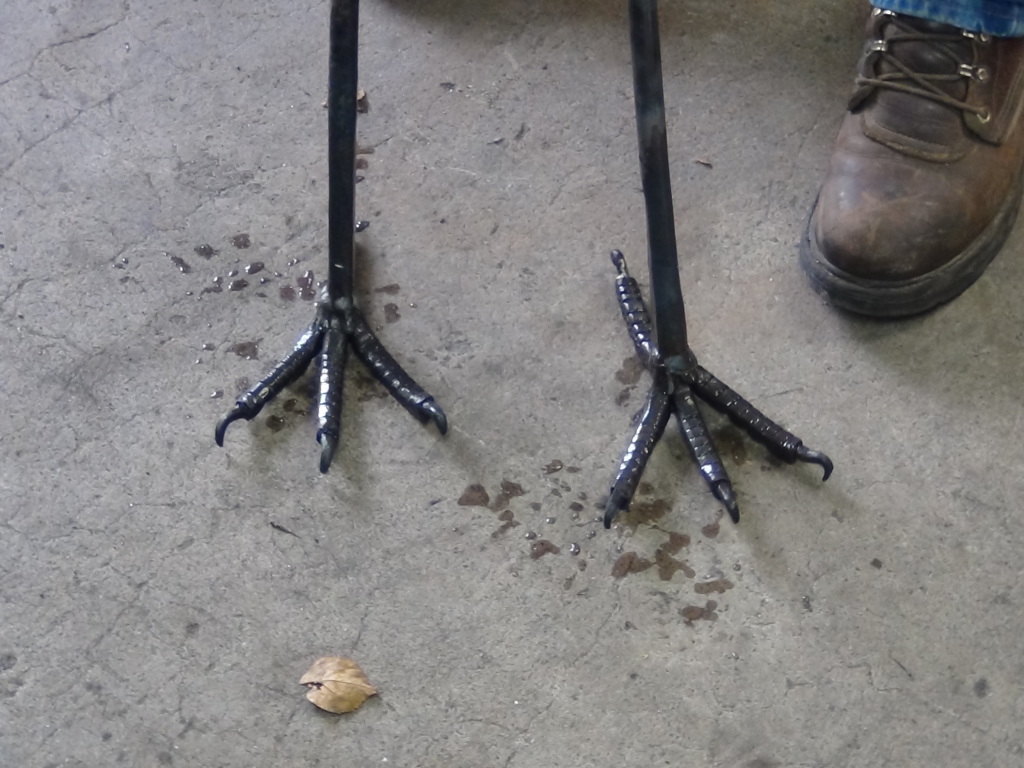 A couple days into it and the first wing was complete and the feet were ready to attach to the body.

This entry was posted in On the Road, People, Uncategorized. Bookmark the permalink.